Like Charles Ives, William Billings did not make a living as a musicain. He was a tanner by trade, but his passion for music led him to become one of the first published American Composers, producing a self-piublished book titled  "A New England Pslam-Singer" which was engraved by Paul Revere in 1770. His composition "Chester" became the unifficial National Hymn during the Revolutionalry War.

Modern Musick seems to be both a throwback to a Renaissance madrigal and a look toward the future. It's quickly changing meter and mood point toward a romantic era composition, and requires virtuosity of those singing it. The harmonies are both traditional and fresh sounding for the time. Here it is in the original version: 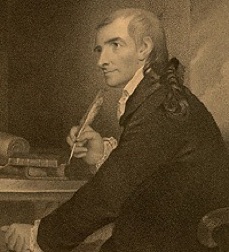